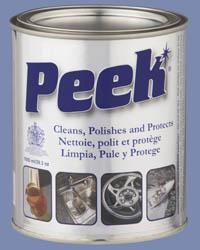 Need some polish?  Summer Sailstice sailors receive a 15% discount when ordering from www.peekpolish.com. All you have to do is admit to being a sailor!

Plus, Peek Polish retards tarnish up to 3 months or more depending on the environment.

"I helped a friend who bought a J122 ( 40 foot sailboat) in Malta sailed it to Puerto Rico. I got on board in Barcelona along with 5 other people including the captain. We stopped in Casablanca, Morocco from there we spent 3 nights in Las Palmas, Canary Islands and from there it took us 18 days across the Atlantic at the very start of hurricane season which was back in June. What an adventure. We lost 2 head sails along the way as well."

Peek has been used by millions since the beginning. In 2005 Tri-Peek International Limited in Great Britain was granted the Royal Warrant from Buckingham Palace, which is only bestowed on a very few companies.