Tales of a Virtual Sailstice 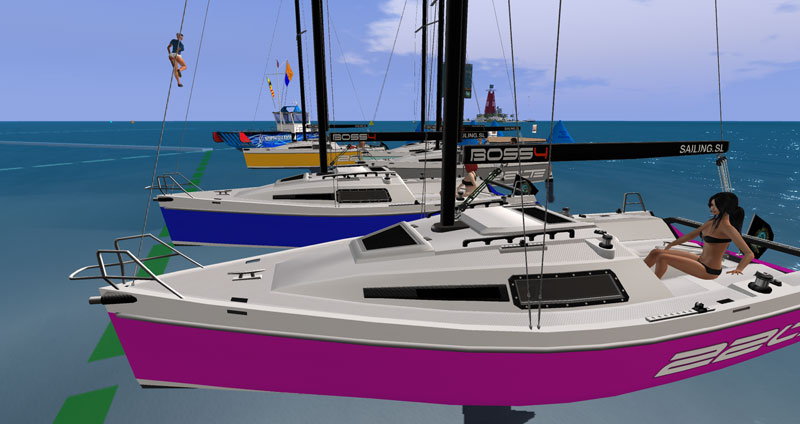 Our Sailstice event was different, in that it was aimed at all the folks who, for whatever reason in this Pandemic year, could not get out on the water.

When my old yacht club, Island Yacht Club in Alameda, CA, asked me to give a Zoom presentation back in March on virtual sailing, I got the idea to create a virtual Summer Sailstice inside the virtual world Second Life. Once the Sailstice office gave the go-ahead, since, Sailstice is supposed to get folks OFF their computers, I logged into SL and started asking people if they would be interested.

Before I go on, I realize that all of this may sound really strange if you've never been inside a virtual world. What's important to know is that SL is NOT a video game.  Everyone and everything beyond the basic platform is created by the real humans who work and play in there. The builders of our virtual sailboats have been honing their modeling and programming skills for the last 15 years, and they behave far more like a real boat than you can imagine. 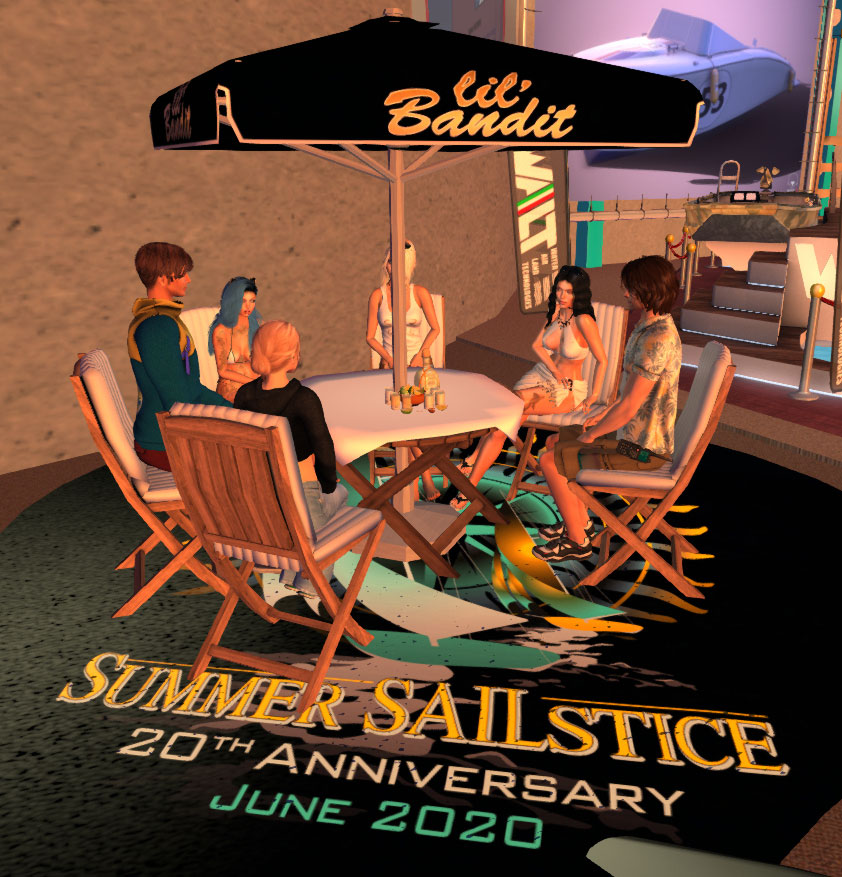 Once I explained what Sailstice is, the response was universal--"Let's do it!"  People from around the world, including Greece, Australia, Italy, the UK, USA and elsewhere, jumped in and started working together with others like they never had before.  Inside SL they manage marinas, run yacht clubs, direct races and lead long cruises.  I immediately created a website to connect everyone to each other and to the RL, 'Real Life,' sailing community.

I contacted the YouTube video producer who contracts with SL owner Linden Lab to create educational and promotional videos about Second Life, and he agreed to do one about our project!  We worked together on that for several weeks, and you can see the tightly edited 2-minute program.

I found some donated yacht club space in the huge Surreal Estates area to use as a headquarters. I suggested to the manager, "Maybe a boat show would be fun?"  Next thing I knew, a pier more than 1,500 meters long had appeared in the virtual sea, with Sailstice banners flying down its length.  Two weeks later I was invited to see a building being created. Remember everything in SL is a work of 3D digital art that would have looked perfect at a World's Fair.  The boat show morphed into the Nautical Exposition and ran the entire week.

People were signing up from around the world; we ended up with 34 registered on the Sailstice website and 159 in our Second Life 'SS in SL' group. I realized we were only talking to the folks who play on our virtual seas, not the ones who play in them.

I contacted the biggest mermaid/merman group in SL. The 'mers' have long been an active and coherent community. It only took just one visit to their longstanding weekly Saturday gathering to get them on board. The mers were invited to all the cruises and parties happening on Sailstice Day, realizing interfering in the races could generate official racer protests.  A yacht club offered their event space and built a huge doughnut-shaped glass dance floor. A very creative mermaid installed lots of colorful coral and plants underneath it, and the 'Sails & Tails' party was ready to go. 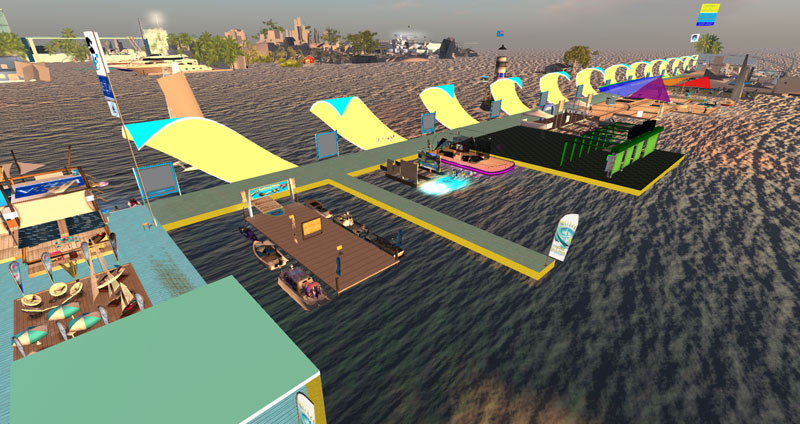 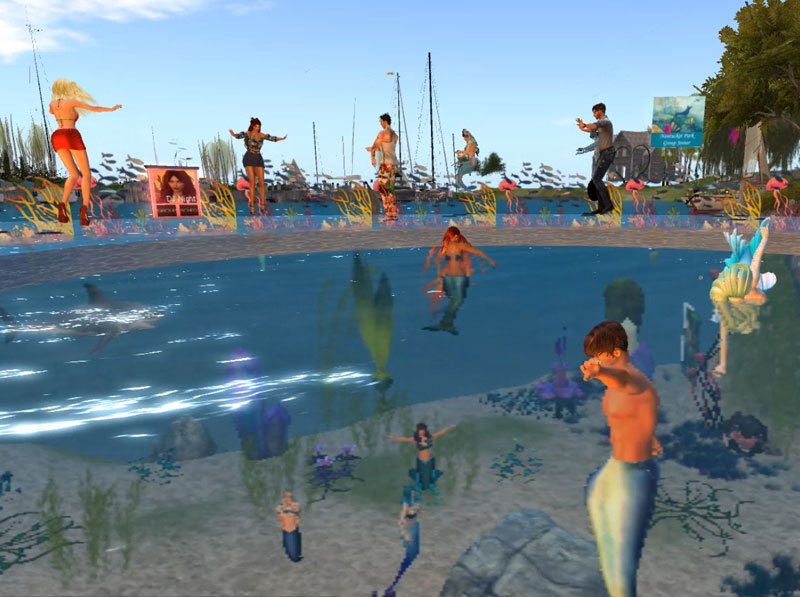 Sailstice Day arrived with a beautiful sunrise, as it always does. The first event was a cruise at 5 am Second Life Time (PST). It was sailed mostly by Europeans. For the next 14 hours, every hour had overlapping races, cruises, and parties. A Novice Regatta, for first-time sailors, was held in the afternoon. Every participant received a free sailboat created especially for this occasion, with trophies going to the top three finishers!  A big Italian-themed marina offered free "boat camping" throughout the weekend.

My best estimate is around 300 people attended our events throughout the day, from all over the world.  The most exciting part of this project is that people from SL's disparate water communities came together to create something special. We are not letting that energy lapse; between now and Sailstice 2021 there is time and talents to broaden the knowledge of SL sailing, including its value to 'Real World' sailors who might want to keep their own skills up between seasons.

Summer Sailstice will be back next year, virus or no, for anyone who is stuck at home on Sailstice Day! 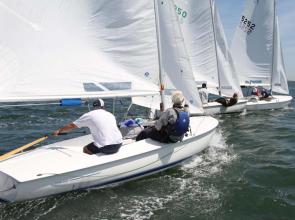 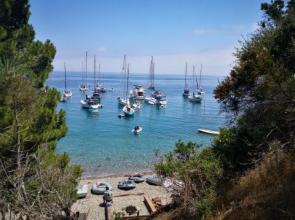 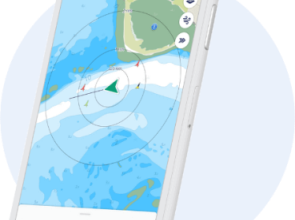 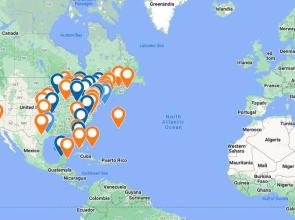 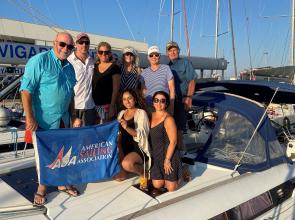