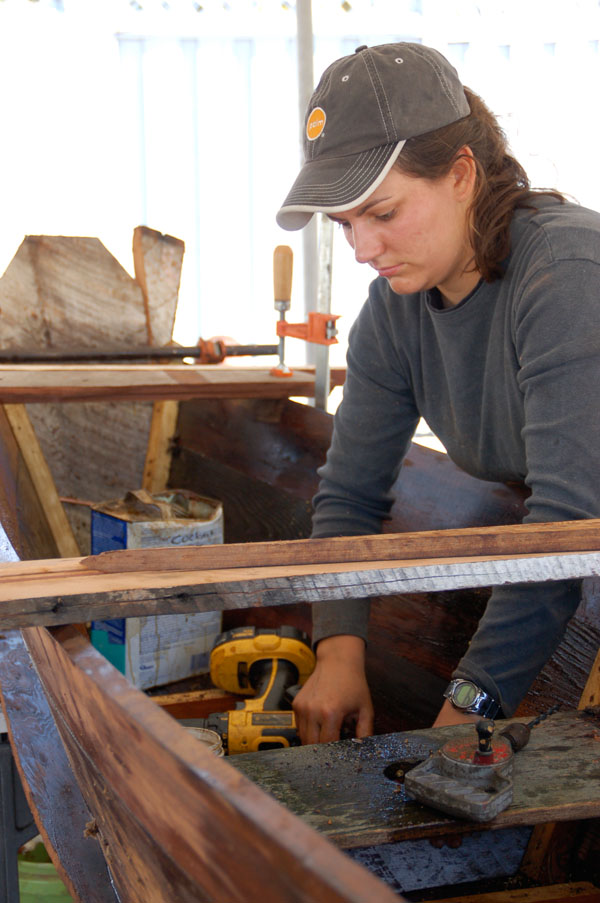 For the 6th year running, EYC club member Ariane Paul has organized a boat building contest for the Summer Sailstice festival on San Francisco Bay, which has turned into one of the most popular events of the day.  Team American Youth Sailing Force will be joining the ranks of contestants for the boat building contest, this year at the Encinal Yacht Club in Alameda. The team will have to build, launch, and race a boat in a single day.

The builders work hard all day under the gaze of spectators and create a wide variety of designs which often surprise onlookers by floating!' commented Sailstice founder, John Arndt. Crowds gather along the shorefront to watch the solid (or not so solid) wooden boats race in the early evening light. The boats have always made it around the course up until last year, where one team enjoyed a brisk swim - we’re all wondering if anyone will be taking a dip this year!

Our confirmed teams for the 2013 contest are (fifth team just announced 6/19):

1. Team Berkeley Marine Center: annual contender and sponsor, and “NO” – the contest is not rigged and they don’t win every time – this team looks forward to the big contest all year long!

2. Team West Marine: Ryan Nelson and the team from West Marine are back again to upgrade their advanced catamaran design from last year.  Look for them to be hot on the water with a new design.

3. Team Liberty: Shaune Price, “Ginja Ninja Mike Redbeard”, and Marga (who was on another team last year) are all geared up and have even tested an advance protype vessel to make sure they know what they are doing.  They are keen to jump in to a fierce competition.

4. Team Klein: John Klein and his family and friends have participated in the Summer Sailstice contest twice, and for many years at the Hyde St. Pier’s previous contest.  We are happy to have them back.

5. Team American Youth Sailing Force: Three of the larger AYSF team will be in the competition, and the rest of their team will be onhand at the Sailstice event at Encinal Yacht Club in their booth. http://americanyouthsailingforce.com/ https://www.facebook.com/AmericanYouthSailingForce

6.  Team OCSC Sailing: led by Mark Pickett.  These guys do an excellent job teaching sailing all year but can they build a boat?  In a day?  Come find out.

Entries are closed but come down and see the sawdust fly!

Sikaflex is coming on as a sponsor this year with donations of their product for all the teams to use. Also a huge thanks to our sponsors from WoodenBoat Magazine, Berkeley Marine Center, and help from John Platt of West Marine.

Local boat yards, shipwrights, and others with the right skills and a viable plan are accepted to compete. Teams consist of three people each. The teams are limited to spending $150 per team on materials for which they submit receipts to be reimbursed. Wood is the primary material. Plywood and recycled materials are also accepted. Boats can be rowed or sailed.  If sailed, teams can bring a pre-made rig and sail. Two of the team members have to be in the boat during the race in the water. Teams will have approximately seven hours to build the boats, can bring two power tools, but can use only one at a time.  When the construction time period has ended, we will announce from the stage to the event attendees to go watch the launches, and then see if the teams can successfully sail or row around with two crew members in their boats (the third builder can help with the launch).  - See more at: http://www.summersailstice.com/article/build-boat-day#sthash.do2LJxGr.dpuf

The contest is judged on several levels including:  design, completing construction in time before cut-off, and viability in the water (finishing the race without sinking).  The crowd lines the shore to watch the in the water race once the boats are built.  The winning team is determined by the votes of judges combined with the votes of all team participants.  There are prizes for the winning team, and 2nd & 3rd place.

To register for the EYC Sailstice Event click here. 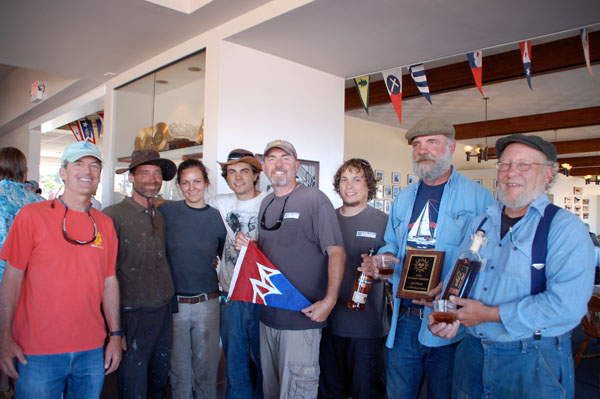 The tired boatbuilding teams and winning Berkeley Marine Center team on the right! 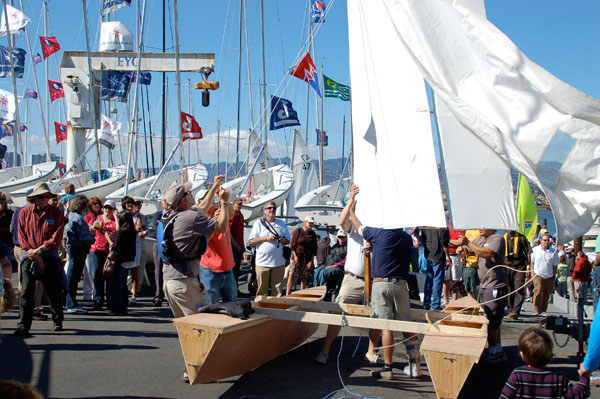 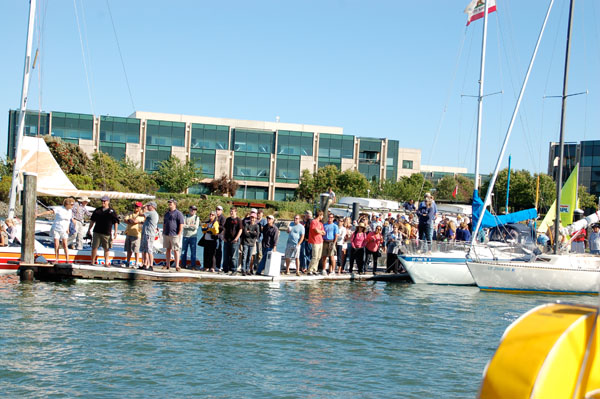 Spectators just about sank the docks.

See the story on PressureDrop. 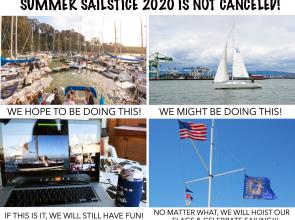 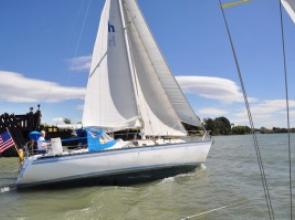